Let's enjoy bird watching in the center of Greater Tokyo

The special reports below are written by foreigners who are guests at the park and support our activities. The park hopes to continue to increase the number of foreigners who use the park. If you would like to write a short blog about your visit to the park to contribute to this page, please contact us by email.

It was a perfect winter day for an outing・・・・

It was a perfect winter day for an outing -no wind, not too cold, and sunny.

First I went down to the East Freshwater Pond to find some waterbirds. There were Grey Herons and Great Cormorants on the shore, and Little Grebes diving in the water. As I was watching these birds, I fortunately observed a Common Snipe passing by the shore, though it was well camouflaged and hard to find it.

In the middle of the Brakish Water Pond, I saw several Tufted Ducks and Eurasian Coots swimming. On the shore Grey Herons were wadering and Great Comorants were perching on the poles. Even though it was a middle of the winter, quite a few crubs, perhaps Yamato Osagani (Macrophthalmus japonicus), were seen on the tidal flat, and I spend some time to watch Grey Herons feeding these crabs using its long neck. In the visitor centre, I met several excited visitors who have just spotted a Northern Goshwark, so I also tried to find it but I couldn't. I continued my walk to the Observation Hat 2 and then to 1, and saw some more Grebes and Tufted Ducks but nothing was new. Outside the Observation House 2, Tabunoki's (Machilus thunbergii) flower started blossoming, telling me that spring is around the corner.

This was my first time to visit the Tokyo Port Wild Bird Park, and I was really surprised at the tranquility of the park -difficult to imagine the heavy trafic and busy central markets and Haneda airport behind the evergreen forests surrounding the park. I didn't mention about forest birds, but I saw White-eyes, Turtle doves, Meadow bunting, Bull-headed shrike, etc. those birds you can usually find in the greener parks in Tokyo. 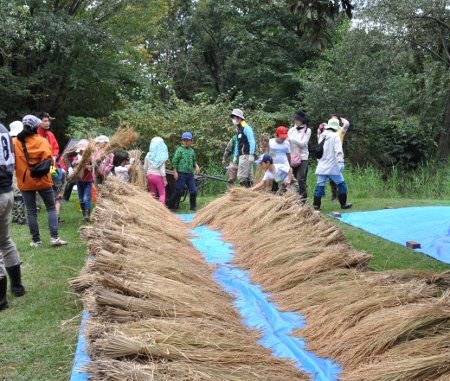 We could gather so many stalks of rice! It’s exciting to know how much rice we will get from it! 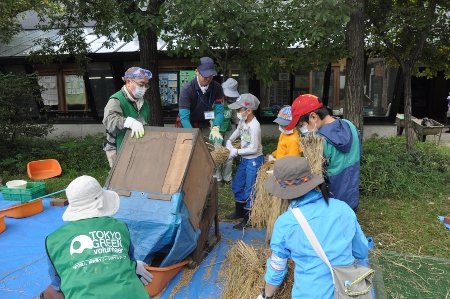 We divided up the tasks into three main groups.
1. We will first do a “foot threshing method” to roughly loosen the plant material and get the husks off the grass stalk. 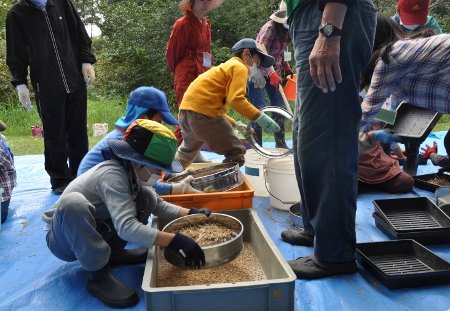 Next we sift the and separate the plant material from the seed husks. 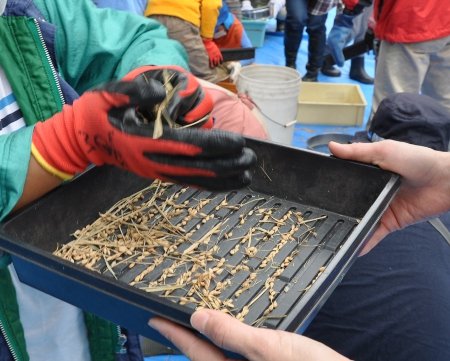 Then, we take a handful of material and rubbing our hands together, separate out a few seeds. 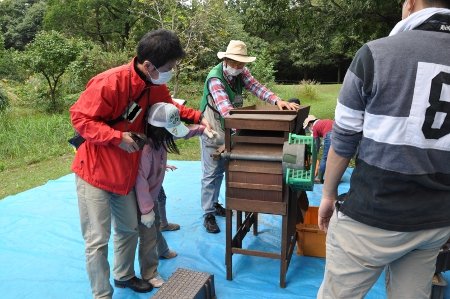 The final step is using the winnower to remove the rice grain from the chaff.

By spinning the handle, the wind inside the machine is generated


Everyone could experience the old-fashioned way of threshing rice, and at the end of the day we were all covered with dust! The surveys taken after the event came back with comments like “Wow! People back in the day had it hard!” “I’m worn out!”

It was great to finally have a full day of sun after a spell of rainy days post Golden Week.

There were quite a few birds in the East Freshwater Pond. As usual, the Common Pochard (Aythyaferina) and Spot-billed Ducks (Anas zonorhyncha) were feeding in groups, ducking their heads deep into the water so their body was only visible from flank down (or up since they were upside down!).
There were also a group of Great Cormorants (Phalacrocorax carbo) nearby - they seemed like they didn’t have a care in the world and splashed about the pond. Two Egrets were also spotted; a Great Egret (Aldea alba) and an Intermediate Egret (Egretta Intermedia). They both preferred to gracefully strut near the grass in solitude. We were lucky to see bluish-green lores on the Great Egret (Aldea alba), an indication that breeding season has commenced.

Eurasian Tree Sparrows (Passer montanus) and a Large-billed Crow (Corvus macrorhynchos) were observed in the East Wing of the park en route to Observation Deck 4. The Large-billed crow was slowly making its way to the top of a tree by progressively jumping to the next highest branch. When it got high enough, it started picking at sticks - wonder what he had up his sleeve